Big crops tend to get bigger and eventually fundamentals will kick in to drive price direction.  That was very evident this week as soybeans continued their steep slide lower with old crop contracts losing nearly $0.25 on the week.  Corn was able to separate itself from beans some this week but still lost a dime or more in most contracts.  The South American crop keeps growing and exports continue to slow down.  These two factors alone are enough to put extreme pressure on the soy complex.  In addition, we are faced with the prospective plantings report in just one week.  Anticipation and price-pressure continues to build as pre-report surveys start to come out.  For several weeks the trade has been pricing in 88.0 million acres of beans and roughly 90 million corn acres.  As we get closer to the real report, chatter of 89+ million bean acres is starting to get louder.  If the USDA prints anything larger than 88.0 prices are likely to take another sharp dive lower.  Corn acres at 90.0 million seem manageable and likely.  The biggest question being bantered about now is the total planted acreage.  After the Outlook Conference in February, many analysts have been pointing to nearly four million “missing” acres.  Will the USDA find those acres and for which crop?  We will all be smarter at 11:01 on March 31.

Prospects of big South American production along with early ideas of huge US bean acres took its toll on new crop bean basis this week.  Discussions about slower than usual soy exports with bigger than usual stocks has end user back peddling to not over pay for beans that are more likely to be forced into the processor market, away from the export channels.

If interpreting market information seems intimidating or you just want to learn more about marketing your grain, email Aaron (aaron.ulland@chsinc.com) for more details about our Back to Basics: Marketing 101 informational session coming up March 28th.

Save the date! Thursday, April 6 there will be a livestock show clinic put on by Show-Rite at the Olmsted County Fair Grounds at 6 pm. We hope to see you there! 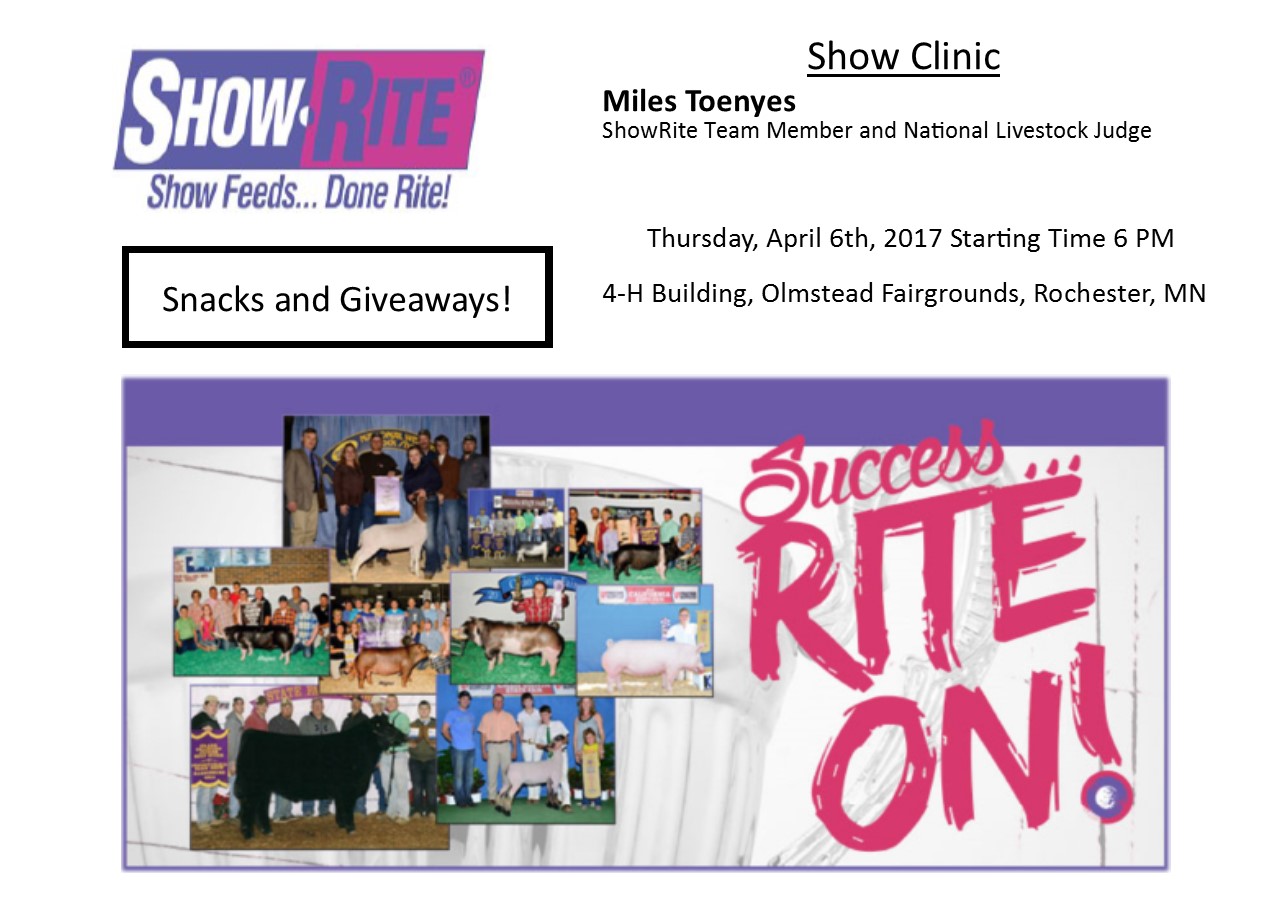 The first full week of March for grain markets was not unlike the recent weather pattern.  Our good times came to a crashing halt leaving us looking for the next glimmer of hope, however dim it might be right now. It seems in the short term fundamental pressures have finally caught up with the futures markets.  When the USDA released the latest Supply & Demand report along with the monthly Crop Production on Thursday, most were expecting a mundane day.  Corn stocks were left unchanged from last month, while US Soybean ending stocks were increased 15 million bushels for the year through a decrease in exports only partially offset by increased crush demand.  While the marketplace has generally been trading 104 to 108 MMT Brazilian bean crop, the USDA is typically slow to respond with world increases.  This month however, the Feds raised their estimate four million metric tonnes confirming the world is awash in soybeans.  Nothing in this week’s reports were seen as bullish news to spur any meaningful rally.  The next key report will come on March 31 with the Prospective Plantings report.

As futures prices continued their descent this week, back to the lower ends of recent ranges, local basis was seen as dropping as well.  In many instances, as board prices fall, basis will improve as a means to entice producer movement and transfer ownership to the user.  Unfortunately that was not the case this week as bean basis took the biggest hit with the increase in stocks.  Corn basis was mostly steady with some pockets of strength, however with ethanol margins under pressure it is likely that strength with be short lived.

February went out with a whimper this week, but March started with a bang.  The optimistic start to February quickly faded away ending the month nearly unchanged.  With a new month came new money flow into commodities driving prices mildly higher early on Wednesday.  The real fireworks this week was influenced by the US government, but not the USDA as is usually the case.  As rumors started to swirl that the President was considering a change to the RFS standard and potentially the ethanol blend rates, corn started to spike higher, nearly reaching the February highs.  However, by the end of the day, the White House soundly denied these rumors and the corn balloon burst.  Daily gains were cut in half for both corn and beans.  Algorithm trading on headlines and rumors has a tendency to create wild volatility in markets, which was clearly demonstrated this week.  After the dust settled from the rumor mill, commodities were still able to manage gains on the week.

The one day rally was enough to pull some grain from producer hands, though less than one would originally think.  In most cases this is the second time seeing this price level for both old and new crop which muted much of the enthusiasm.  From a basis standpoint, most bids have rolled to the May futures.  Moving the bids from the March futures to May didn’t have much net effect on prices this time.  Local domestic users such as ethanol plants and soybean processors are getting enough bought but are still facing tough competition from the river terminal market.  Carry in the markets has pushed much of the grain sales to later in the spring and summer, yet we all know the grain is in the country and needs to move to market before the next harvest.

The CHS (Rochester) annual meeting is Friday, March 17, 2017 at the Kahler Apache. The doors open at 9:30 am with the meeting at 10:30 am with lunch to follow. We are also looking for food and monetary donations for our Harvest for Hunger food drive! Please consider bringing nonperishable food items that will be distributed throughout those communities that we serve. Help us fight hunger! 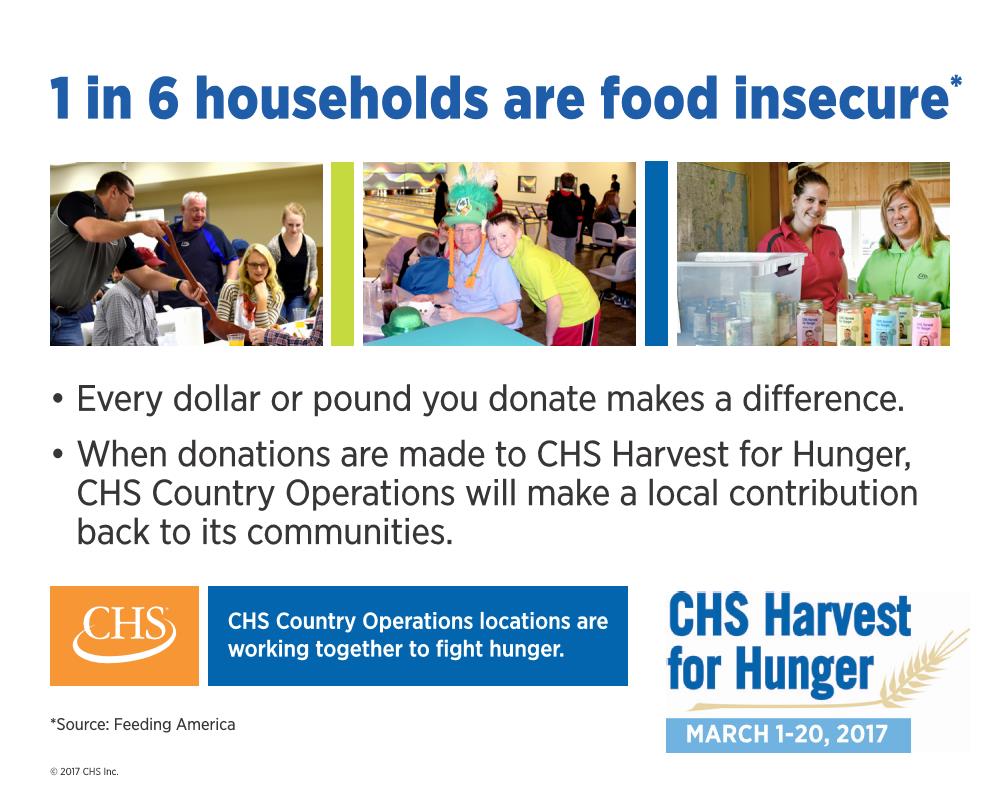